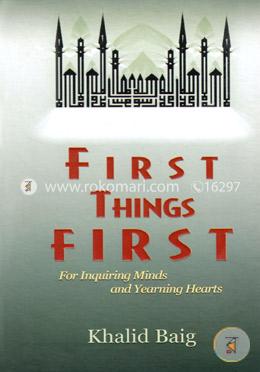 "First Things First: For Inquiring Minds And Yearning Hearts " back cover of the book:
“KHALID BAIG HAS A RARE and rich gift for both precision and thoroughness: in two to three pages, he manages to say more than most writers would in several dozen pages. His non-polemical style, calm and measured tone, careful and balanced opinions, and insightful comments are sure to make this book an engaging and immensely rewarding reading experience. It deserves to be widely circulated and read by both Muslims and non-Muslims alike." —MUMTAZ AHMAD, Ph.D, PROFESSOR OF POLITICAL SCIENCE - HAMPTON UNIVERSITY - HAMPTON, VA

“RARELY DOES AN ISLAMIC BOOK arrest the attention of the non-scholarly fraternity of South Africa in such a manner as did Khalid Baig's First Things First. Within a few days, our entire stocks were depleted by enthusiastic readers who purchased additional copies to distribute to others in order to share their enlightening and thought-provoking experience.
This book has restored the confidence of the Ummah in Islam ... One is left energized and wonderstruck after reading any article. It should be introduced as extracurricular reading for students attending universities, Muslim schools, and madrasahs." -MAULANA “ABBAS 'ALI JEENA, PRESIDENT - COUNCIL OF MUSLIM THEOLOGIANS (JAMIATUL ULAMA), SOUTH AFRICA

“... an immensely rewarding read ... Comparison of Islamic precepts with the state of the western society adds an edge to the author's assertions. Arguments are put across forcefully and convincingly ... [Y]ou cannot resist the urge to read this book.” -DAWN, PAKISTAN

“FTF IS THE MOST POPULAR and must-read feature article of Impact. The reward is Khalid Baig's though the gift is there to be shared by everyone." --MUHAMMAD HASHIR FARUQI, EDITOR, IMPACT INTERNATIONAL - LONDON, ENGLAND

Listening To The Quran