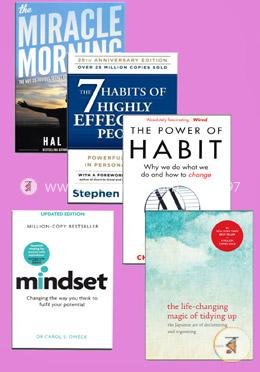 ‘The Power Of Habit’ Book CONTENTS: PROLOGUE
The Habit Cure - xi
PART ONE
The Habits of Individuals
1. THE HABIT LOOP
How Habits Work – 3
2. THE CRAVING BRAIN
How to Create New Habits – 31
3. THE GOLDEN RULE OF HABIT CHANGE
Why Transformation Occurs – 60
PART TWO
The Habits of Successful Organizations
4. KEYSTONE HABITS, OR THE BALLAD OF PAUL O’NEILL
Which Habits Matter Most – 97
5. STARBUCKS AND THE HABIT OF SUCCESS
When Willpower Becomes Automatic – 127
6. THE POWER OF A CRISIS
How Leaders Create Habits through Accident and Design – 154
7. HOW TARGET KNOWS WHAT YOU WANT BEFORE YOU DO
When Companies Predict (and Manipulate) Habits – 182
PART THREE
The Habits of Societies
8. SADDLEBACK CHURCH AND THE MONTGOMERY BUS BOYCOTT
How Movements Happen – 215
9. THE NEUROLOGY OF FREE WILL
Are We Responsible for Our Habits? – 245
APPENDIX
A Reader's Guide to Using These Ideas – 275
Acknowledgments – 287
A Note on Sources – 291
Notes – 293
Index – 355

'7 Habits of Highly Effective People'Summary of the book The 7 Habits of Highly Effective People, first published in 1989, is a business and self-help book written by Stephen Covey.[1] Covey presents an approach to being effective in attaining goals by aligning oneself to what he calls "true north" principles based on a character ethic that he presents as universal and timeless.
Covey defines effectiveness as the balance of obtaining desirable results with caring for that which produces those results. He illustrates this by referring to the fable of the goose that laid the golden eggs. He further claims that effectiveness can be expressed in terms of the P/PC ratio, where P refers to getting desired results and PC is caring for that which produces the results.
Covey's best-known book, it has sold more than 25 million copies worldwide since its first publication. The audio version became the first non-fiction audio-book in U.S. publishing history to sell more than one million copies.[2] Covey argues against what he calls "the personality ethic", that he sees as prevalent in many modern self-help books. He promotes what he labels "the character ethic": aligning one's values with so-called universal and timeless principles. In doing this, Covey is deliberately and mindfully separating principles and values. He sees principles as external natural laws, while values remain internal and subjective. Our values govern our behavior, while principles ultimately determine the consequences. Covey presents his teachings in a series of habits, manifesting as a progression from dependence through independence on to interdependence.

"Mindset: Changing the way you think to fulfil your potential": Dweck explains why it's not just our abilities and talent that bring us success-but whether we approach them with a fixed or growth mindset. She makes clear why praising intelligence and ability doesn't foster self-esteem and lead to accomplishment, but may actually jeopardize success. With the right mindset, we can motivate our kids and help them to raise their grades, as well as reach our own goals-personal and professional. Dweck reveals what all great parents, teachers, CEOs, and athletes already know: how a simple idea about the brain can create a love of learning and a resilience that is the basis of great accomplishment in every area.