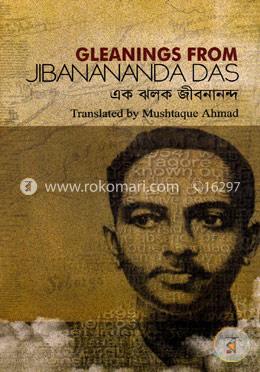 Jibananda Das is an outstanding architect of Bengali poetry. He is still rated as most significant exponent of modern Bengali literature after Rabindrantath Tagore and Nazrul Islam. His poetic world composed of Bengal’s beauteous and mesmerising nature and historic continuity of mankind as a whole. Jibanananda mastered a distinct poetic diction by his exotic metaphors and surrealistic imageries. Critics are often tempted to call him ‘purest’ or most genuine of poets.
This slim volume includes twent-two poems by Jibanananda in English translation, done by professor Mustaque Ahmed. Prof. Ahmad has done the job quite convincingly by adopting the method of interpretive rendering, rather than a literal one. The world reader are expected to have an idea of the height of Bengali poetry as well as the greatness of jibanananda

About Writer : Jibanananda Das (1899-1954) was born in Barisal. He completed the MA in English from University of Calcutta. He Started his teaching career as a tutor in City College of Calcutta. His remarkable works are Dhushor Pandulipi, Bonolota Sen, Mohaprithibi, Shaatti Tarar Timir, Ruposhi Bangla, Bela Obela Kalbela etc. His best poems won the Indian Shahitya Akademi Award in 1955.

About Translator : Professor Mushtaque Ahmad was born (1940) in a respectable Muslim family of Ramu, Cox’s Bazar. While serving as Professor of English at Sylhet Government College he joined the war of Liberation in March, 1971. He is a founder-principle of Ramu College. At present he is leading retired life. He is an widely traveled man. He has written and rendered into English the history of Cox’s Bazar. The title of the work is “Glimpses of Cox’s Bazar”. He regularly Contributes articles to periodicals and Journals.