'Sea of poppies' Summary of the book
In Amitav Ghosh’s novel Sea of Poppies, Deeti lives in a village four hundred miles from the Indian coast. She has never seen the sea or a ship, and she has never left her home district. One day she has a vision of a sailing ship and she knows that it is a sign, although she is not yet certain what it portends. Deeti’s life is neither happy nor unhappy; it is a ceaseless round of back-breaking work. She does not love her husband, Hukam, who was injured in battle and now, disabled, works in an opium-processing factory. He has become an opium addict. Their daughter, Kabutri, was in fact fathered by his brother, Chandan, after Deeti was drugged and raped with the family’s connivance. Deeti has unexamined feelings for Kalua, a member of the leather workers’ caste, whom she rescued, without his apparent knowledge, from a beating. However, when Deeti’s husband dies, and she determines to commit sati (throw herself on Hukam’s funeral pyre) rather than marry Chandan, it is Kalua who rescues her from the fire and then leaves the village with Deeti, determined to find sanctuary elsewhere. Eventually, they find their way to Calcutta and, aware that Deeti’s in-laws are still searching for her, determine to leave for Mauritius to become indentured laborers.
The ship in Deeti’s vision is later identified as the Ibis, a former slave ship, in poor condition, that has been sold to Benjamin Burnham and is now being taken to Calcutta for refitting. Zachary Reid, a mulatto freedman from Baltimore, has signed on as ship’s carpenter because he cannot find employment in his home town. The voyage to India is little short of disastrous, thanks to the ship’s condition. Illness breaks out, and Reid finds himself inadvertently rising to become, at one point, the ship’s de facto captain. He is helped by a group of lascar sailors, led by the mysterious Serang Ali, who effectively run the ship and who clearly have plans for the newly minted Zakri Malun. They make over Reid’s wardrobe so that he can play the part of a gentleman, and he learns their language and their various ways, coming to appreciate their food as well. What Serang Ali’s plans are for Reid remain unclear throughout the novel.
Having brought the ship safely to Calcutta, Reid finds himself among a colorful collection of “old India hands,” who represent themselves as understanding the ways of the Indians and the lascars but whose apprehension of local ways is quite different from Reid’s. In turn, they look askance at him because he seems able to engage with all segments of the population on apparently equal terms. As a result, they view him with the deepest suspicion. Eventually, the new first mate of the Ibis, Mr. Crowle, discovers that when Reid first joined the Ibis he had been described on the manifest as “black” and so seeks to blackmail him.
As a presentable member of the crew, and because of his gentlemanly ways, Reid is invited to dine with the Burnhams, and it is here that he encounters Paulette Lambert, whom he previously met when he rescued her foster brother, Jodu, and gave him a place on the ship. Reid and Paulette inhabit a similar place in society, neither native nor gentry. While Reid has been assimilated into the culture of the lascars, Paulette has been brought up by an Indian woman and prefers Indian habits. Her father was a freethinker, and she did not receive a religious education. When she is adopted by the Burnhams, their concern is to rectify this...(enotes.com)

Amitav Ghosh (born 11 July 1956) is an Indian–American author best known for his work in English fiction.Amitav Ghosh was born in Calcutta on 11 July 1956 to a Bengali Hindu family, to Lieutenant Colonel Shailendra Chandra Ghosh, a retired officer of the pre-independence Indian Army. He was educated at the all-boys Doon School, where he edited The Doon School Weekly. His contemporaries at Doon included author Vikram Seth and Ram Guha. After Doon, he received degrees from St. Stephen's College, Delhi University, and Delhi School of Economics. He then won the Inlaks Foundation scholarship to complete a D. Phil. in social anthropology at St Edmund Hall, Oxford, under the supervision of Peter Lienhardt. His first job was at the Indian Express newspaper in New Delhi.

The Hungry Tide ('The Trip of a Lifetime' Business Standard) 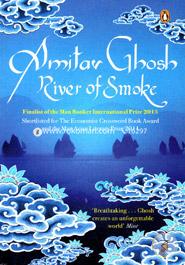