Rising from the Ashes : Womens Narratives of 1971 (Hardcover) 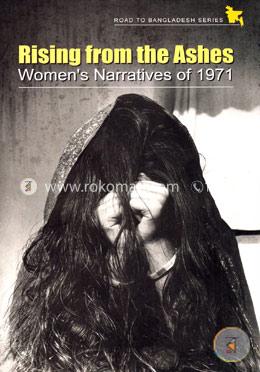 Rising from the Ashes : Womens Narratives of 1971 (Hardcover)

“Rising from the Ashes: Women’s Narratives of 1971” is a collection of the experiences of 22 women who faced fire, rape, eviction, displacement and death, during the war of independence in Bangladesh in 1971, and lived to tell the tale. These women are neither the creators nor the determinants of history. Their ordinary lives were uprooted by the sudden maelstrom of war. The barbarity of the Pakistani Army has marked every part of their life, but even after the war their struggles for survival, for recognition and claims for justice are an important part of the national history. From 13 women, we get an account of how their family members were killed. 9 women describe their experience of rape. The scars of these painful experiences reach far deeper than the immediate reactions to war. That is why their testimonies do not bear the black-and-white distinctions made in wars, nor is there any colour added for effect. Their personal experiences are an indictment of the war and of military brutality. These unembellished stories may be some of the most powerful to emerge from the liberation war.

About the Editors
Shaheen AKHTAR is an award winning novelist and currently the Editor of Ain o Salish Kendra (ASK) publications. Her novel, Talaash, won Prothom Alo’s Best Book of the Year Award in 2004. Its English translation was published by Zubaan in January 2011.

Suraiya BEGUM is an Assistant Director at Research Initiatives Bangladesh (RIB). She is also the Associate Editor of Samaj Nirikkhon and The Journal of Social Studies.

Meghna GUHATHAKURTA was a Professor at the Department of International Relations in the University of Dhaka and is currently the Executive Director of Research Initiatives Bangladesh (RIB). She is also a member of the Executive Committee of Ain o Salish Kendra (ASK).

Hameeda HOSSAIN is chairperson and founder–member of Ain o Salish Kendra (ASK). She was editor of ASK’s annual publication Human Rights in Bangladesh from 1996 to 2007 and has written extensively on human rights and women’s rights. She is also Vice Chair of Research Initiatives Bangladesh (RIB).

Sultana KAMAL is the Executive Director of Ain o Salish Kendra (ASK), Chairperson of the Board of Trustees of Transparency International Bangladesh and a former Adviser to the Caretaker Government.

Niaz ZAMAN is Professor of English at University of Dhaka. She is also the Publisher of writers.ink. She has translated and authored numerous books on Bangladeshi crafts, literature, heritage and culture.

A Divided Legacy - The Partition in Selected Novels of India, Pakistan and Bangladesh

1971 and After: Selected Stories