The Greatest Salesman In The World (Paperback) 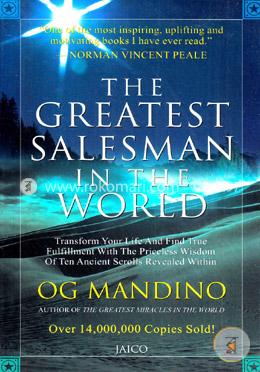 The Greatest Salesman In The World (Paperback)

'The Greatest Salesman in the World' Summary of the book
The Greatest Salesman in the World is a book, written by Og Mandino, that serves as a guide to a philosophy of salesmanship, and success, telling the story of Hafid, a poor camel boy who achieves a life of abundance. The book was first published in 1968, and re-issued in 1983 by Bantam. A hardcover edition was published by Buccaneer Books in June, 1993. In 1970, Success Motivation Institute purchased the rights to produce the audio recording.
If Mandino's suggested reading structure is followed, it would take about 10 months to read the book. The instructions are to read Scroll I (Chapter 8) three times a day for thirty days straight. Only after completing the thirty days of reading Scroll I, should you continue to Scroll II (Chapter 9) and so forth through Scroll X (Chapter 17). Mandino composed The Legend Of The Ten Scrolls. They are:
Scroll I - I will Form Good Habits and Become their Slave
Scroll II - Greet Each Day With Love In Your Heart
Scroll III - I Will Persist Until I Succeed
Scroll IV - I am Nature's Greatest Miracle
Scroll V - Live Each Day as if it Were Your Last
Scroll VI - Master Your Emotions
Scroll VII - The Power of Laughter
Scroll VIII - Multiply Your Value Every Day
Scroll IX - All is Worthless Without Action
Scroll X - Pray to God for Guidance
His primary message was to "do it now". In the marking of Scroll IX, "I will act now" is written 18 times. While his messages did have Christian undertones (by referring to Paul as the greatest salesman in the world), it was still a message of repetitive actions to build good habits.
Actor Matthew McConaughey cited this book as having changed his life. The book is also recommended by Tariq Jameel, who says that the book should be read by everyone looking for success in his life.[

Og Mandino (December 12, 1923 – September 3, 1996) was an American author. He wrote the bestselling book The Greatest Salesman in the World. His books have sold over 50 million copies and have been translated into over twenty-five different languages. He was the president of Success Unlimited magazine until 1976 and is an inductee of the National Speakers Association's Hall of Fame. Mandino wrote The Greatest Salesman in the World which contains the "time-tested wisdom of the ancients distilled into ten simple scrolls" which, if followed for the prescribed ten months, will as Og says, "seep into my other mind, that mysterious source which never sleeps, which creates my dreams, and often makes me act in ways I do not comprehend. As the words of these scrolls are consumed by my mysterious mind I will begin to awake, each morning, with a vitality I have never known before. My vigor will increase, my enthusiasm will rise, my desire to meet the world will overcome every fear I once knew at sunrise, and I will be happier than I ever believed it possible to be in this world of strife and sorrow." The scrolls each have a principle designed to replace bad habits built up over a lifetime which "threatens to imprison my future" with good habits developed through a ten-month process of studying the scrolls.