10 Day Of Her Life As Seen By David Colberet (Paperback) 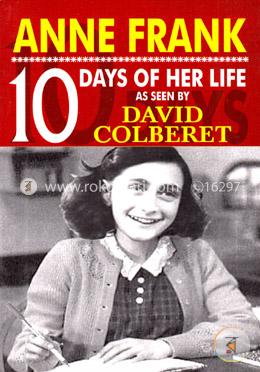 10 Day Of Her Life As Seen By David Colberet (Paperback)

‘10 Day Of Her Life As Seen By David Colberet’ Book Contents:
DAY 1: MAY 15, 194O SURRENDER
DAY 2: APRIL 29, 1942 “J OOD”
DAY 3: JULY 6, 1942 THE VANISHING
DAY 4: MARCH 28, 1944 “DEAR KITTY”
DAY 5: APRIL 9, 1944 BREAK-IN
DAY 6: AUGUST 4, 1944 CAUGHT
DAY 7: AUGUST 8, 1944 WESTERBORK
DAY 8: SEPTEMBER 5, 1944 SEPARATED
DAY 9: OCTOBER 7, 1944 SECRETS AND LIES
DAY 10: MARCH 1945, WE HAVE OUR PEACH
AFTERWORD: JULY 19, 1945 LEGACY
ANNE FRANK DIARY OF A YOUNG GIRL
“10 Day Of Her Life As Seen By David Colberet” Introduction:
The short life of an ordinary schoolgirl may seem to be an unlikely subject for a biography. Yet when we read about Anne Frank, we defy what Nazi Germany hoped to achieve. The Holocaust was meant to be nameless-the Nazis tattooed numbers on most of their victims instead. Some of the world's first large. Computers, sold to the Nazis by the American company IBM, literally reduced the victims to old style computer punch cards. So the personal story of every Holocaust victim is an act of defiance simply because it's personal.
It's easy to quote statistics: six million Jews murdered-90 percent of the Jewish population of Poland, Germany, and other European countries. More than three million Poles, Slavs, Communists, Socialists, pacifist Christians, Gypsies (Roma), homo-sexuals, disabled, and people of African descent bring the total murdered to perhaps eleven million…