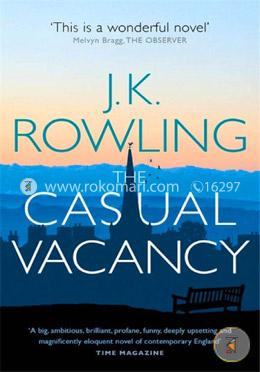 "The Casual Vacancy" Summary Of The Book
The Casual Vacancy occurs in the Parish Council when the popular Councillor Barry Fairbrother dies unexpectedly of an aneurism. The small village of Pagford is torn apart by petty jealousies and rivalries, and social and political ambitions.
The main issue driving the election campaign concerns the public housing community, The Fields. The high class citizens of the village want nothing to do with the council estate. They believe the inhabitants of The Fields to be an idle group, who live off the state and pass through addiction centers.
Barry Fairbrother had himself come from The Fields and shared a bond with the people there. He wanted to bring the council estate into the mainstream of the Parish Council and had been working on many programmes to help the people of The Field.
One of his favorite proteges was Krystal Weedon, the daughter of a heroin addict mother. He includes her in a rowing team at the school and tries in other ways to bring her of her tough shell and fit into the larger community. After Barry’s death, the undercurrent in the community rise to the surface. The online parish community becomes a hotbed for rumor and accusations as someone under the name The Ghost of Barry Fairbrother reveals secrets about those who are contesting for the council seat.
As secrets are revealed and hidden passions come to the surface, the contest over The Casual Vacancy peels off the idyllic veneer of the attractive village. The petty warring and factionalism in the village community affects many families and leads to tragedies and some final resolutions.
The village and the story are inhabited by complex characters. There is the doctor Parminder Jawanda, a caring member of the community. Yet, she’s not so understanding towards her underachieving youngest child, Sukhvinder, and drives her unmercifully. There is Fats Wall, the school bully who picks on Sukhvinder and harries her beyond endurance. But he too is troubled, as he was adopted and this fact affects his behavior to a great extent.
The Casual Vacancy is mostly a dark tale, peeling off facades to reveal the ugliness of human nature underneath. It also shows many of the characters redeeming themselves after a tragedy that affects the whole community.

J. K. Rowling is best known as the author of the Harry Potter fantasy series. She graduated with a degree in French and the Classics from the University of Exeter. She worked as a bilingual secretary at Amnesty International. She later taught English as a Foreign Language in Portugal, where she met and married her first husband. She has a daughter by her first marriage and two children by her second marriage.

Harry Potter and the Philosopher's Stone