Summary of the Book
In this book, Pavan Varma writes about how the Indian middle class has evolved through the years after the Independence. He explains how the underprivileged struggle to find the basic requirements for survival while the middle class turns a blind eye. He also explains how economic liberalization is the root cause for this insensitivity and for the withdrawal from all factors unrelated to its own well-being. This book criticizes the middle class and states that its moral bankruptcy is fuelled by its selfish desires. The writer also mentions how corruption, regionalism and the urban-rural divide continue to ruin India’s growth. This book enlightens readers about the class struggle and how empathy is needed to change the system.

About Pavan Varma
Pavan K. Varma was the advisor to the Chief Minister of Bihar, Nitish Kumar, with cabinet rank. He is also a former Indian Foreign Service officer. He has also written Ghalib: The Man, The Times, Havelis of Old Delhi, Krishna: The Playful Divine, Yudhishtar and Draupadi and Being Indian: The Truth About Why the 21st Century Will Be India’s.

Varma spent several years in the Indian Foreign Services, working in several locations, including New York and Moscow. He has also served as the Press Secretary to the President of India, the Spokesman in the Ministry of External Affairs, the Joint Secretary for Africa and the Director General of the Indian Council for Cultural Relations, New Delhi and the Indian Ambassador to Bhutan.

Pavan K. Varma (born 5 November 1953) is a former Indian Foreign Service officer and was an adviser to the Chief Minister of Bihar, Nitish Kumar, with cabinet rank.With effect from June, 2014 he was a Member of Parliament (Rajya Sabha) until July 2016. He is currently the National General Secretary and National Spokesman of the Janata Dal (United). Varma is a graduate of St. Stephen’s College, New Delhi where he studied History (Honours) and received the first position. He was President of the St. Stephen’s College Debating Society as well as the star debater and elocutionist of the University of Delhi. He also won the Sir CP Ramaswamy Aiyar Memorial Essay Prize at St. Stephen’s. Subsequently, he acquired a degree in Law from the University of Delhi. 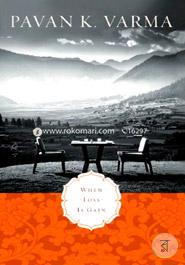 WHEN LOSS IS GAIN