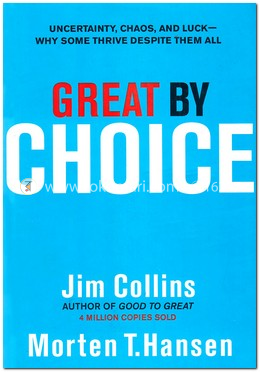 In Great By Choice, the thought-provoking sequel to Jim Collins’ Good To Great, the authors, Collins and Hansen, come together to dissect the dynamics of companies that surprisingly thrive even amidst chaos and uncertainty.

The book details the principles that can help build and sustain a successful, robust enterprise. The strategies outlined in the book are highly pertinent in the fast-paced twenty-first century, one that is highly unpredictable and often marked by political and socioeconomic turmoils.

The authors introduce and explain a variety of innovative, yet practical concepts that defy conventional wisdom. Some of these concepts include the 10Xers, the SMac recipe, Zoom Out, Then Zoom In, Fire bullets then Cannonballs, Leading Above the Death Line, and the 20 Mile March. The book is filled with interesting stories of several pioneer companies that scaled dizzying heights and set new standards for success in their respective industries. These companies are termed ‘10X companies’ in the book as they surpassed their industry indexes by as many as ten times in a span of 15 years—years marked by extremely rapid and unpredictable changes.

The book also builds comparisons between these successful enterprises and other enterprises that failed to manifest success in similar, trying circumstances.

It is backed by 9 years of solid research and in-depth analysis, both of which have thrown up numerous surprising results. For example, it was revealed that the best leaders were not really more creative, farsighted, or risk-taking than their unsuccessful counterparts. Instead, they were more paranoid, more disciplined, and more open to experimentation than the second group.

In the final chapter, Collins and Hansen systematically explore the role played by luck in making or breaking the fortunes of a company. The authors use a data-driven approach to build a solid case to prove that greatness is not a matter of chance, but one of choice, even in an uncertain, tumultuous world.

About The Authors
Jim Collins is an American author, business consultant, and lecturer.
His books include, Good To Great And The Social Sectors, How The Mighty Fall: And Why Some Companies Never Give In, and Good To Great. He is also the co-author of books like Beyond Entrepreneurship: Turning Your Business Into An Enduring Great Company, and Built To Last: Successful Habits of Visionary Companies.

Jim Collins was born James C. Collins III in the year 1958 in Boulder, Colorado. He was a faculty member at Stanford University’s Graduate School Of Business, and there he was honored with the Distinguished Teaching Award. In 1995, he established a management laboratory in Boulder, Colorado. He has worked with various organizations in the social sector. He has degrees in mathematical sciences and business administration from Stanford University. He now teaches executives from the social and corporate sectors, and conducts research. He is married to Joanne Ernst, a former triathlete.

Morten T. Hansen is an American lecturer and author.
He has written the book Collaboration, and has co-authored the book Great By Choice with Jim Collins.

Hansen has a doctorate in business administration from Stanford Graduate School of Business. He was a Fulbright Scholar while at University. He is now a management professor at INSEAD, France and at the University of Berkeley, California. He also gives talks and consultations to businesses worldwide.