The times have changed. Managing a company isn’t what it used to be. Managers and directors can no longer get away with dated methods and principles. The hurdles a manager must face are different, and in this book, Drucker demonstrates just how different they have become. Here, he shows individuals and organizations how the playing field has evolved. He talks about the seven major assumptions made by the experts until now, and how those assumptions are obsolete in the new century. He explains the main implications this has for businesses and assumptions, demonstrating how organization methods need to evolve to catch up. He shows how the use of process models, personality type theory, and ideas of human consciousness to improve individual, team, and organizational performance is about to change everything. He also shows how organizations are classified in a manner similar to the Myers-Briggs Type Indication (MBTI) test for personalities.

About Peter F. Drucker
Peter Drucker was an American management consultant, writer and educator born in Austria. He is known for his development of the concept known as management by objectives. He is largely considered to be the Founder of Modern Management.

Drucker was presented the Presidential Medal of Freedom, the Grand Silver Medal for Services to the Republic of Austria and the Austrian Cross of Honour for Science and Art, 1st class. He has also written Concept of the Corporation, Men, Ideas and Politics and Post-Capitalist Society. 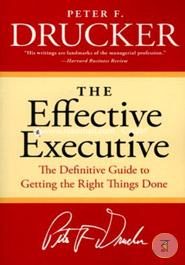 The Effective Executive: The Definitive Guide to Getting the Right Things Done (Harperbusiness Essentials)