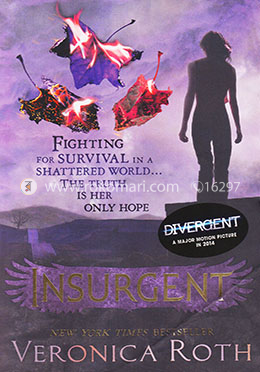 Fighting for Survival in a Shattered World... The Truth is her Only Hope

Summary of the Book
Choices are everything. No one knows that better than Tris Prior. Her initiation day ended with unimaginable horrors, and she must now embrace her Divergence. The factions are beginning to clash with one another, their very ideologies are conflicting. There can be no impassive parties in the face of war, and Tris must pick her side. However, Tris still cringes at any thought of the past. She will not back away, and Tobias knows that something is wrong. The surviving members of Abnegation are on the run and traitors are on the hunt. There are dark secrets waiting to be revealed, and this will surely cripple everything that the factions believe in. Will these secrets destroy the factions once and for all, or will they rejuvenate them and make them stronger?

About Veronica Roth
Veronica Roth is an American novelist and short story writer best associated with her Divergent trilogy.

Series Reading Order
Initiates, you’ll want to know that this is the second book in the series. It is preceded by Divergent. The story of Tris and her friends continues in Insurgent and Allegiant. If you’re interested in more Divergent related books, get your copies of The World of Divergent: The Path to Allegiant and Four: A Divergent Story Collection now.

Veronica Roth (born August 19, 1988) is an American novelist and short story writer known for her debut New York Times bestselling Divergent trilogy, consisting of Divergent, Insurgent, and Allegiant; and Four: A Divergent Collection. Divergent was the recipient of the Goodreads Favorite Book of 2011 and the 2012 winner for Best Young Adult Fantasy & Science Fiction.