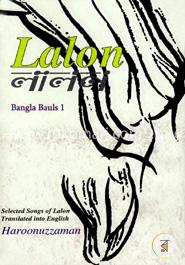 There is no beauty truer than the beauty of God in the universe that lives within our souls. Baul songs are of joy and love and their longing for mystical union with the divine within. The songs of the Bauls contain an extensive meaningful philosophy that connects to all their life and aspirations.
Lalon Fakir, also known as Lalon Shah, is considered to be the greatest of all Baul poets. Lalon was a humanist who completely rejected all distinctions of caste and creed. His song Shob Loke Koi Lalon Ki Jat Shongshare indicates his strong belief in humanity. Lalon wrote songs on Guru or the spiritual guide, the central idea depicting that emancipation of the soul is not possible without guidance. His songs speak of the special bond that exists between the creator and His creations. Lalon songs are a unique example of ascetics, mysticism and divinity.
Lalon লালন, the first book of the series titled “Bangla Bauls” is the revised and extended edition that contains the English translation of fifty selected songs.
This volume has been prepared to focus on and practice of our own creative culture and to let our Bangali ideas, philosophy, folklore and imagery be known to the people of the dominating colonial/neo-colonial Center. Therefore, efforts have been made to translate some selected songs of Lalon Shah almost literally from Bangla language into English language used here as a medium of expression and a response to thwart the cultural, intellectual supremacy of the Center.
Even after 119 years of his death, Lalon’s powerful metaphysical lyrics are amazingly alive in the superfluity of our present-day market-driven culture, and they will continue to provide us with a cushion to consumerism and drab commercialization that are sweeping across the contemporary times.

Haroonuzzaman, a translator, novelist, poet and essayist, was born in Dhaka on January 13, 1951. He has been into teaching at home and abroad (Libya, Qatar) for about 27 years. For the past 12 years, he has been teaching English at Independent University, Bangladesh (IUB). Besides, he had been a feature writer of Depthnews, Manila and into English language journalism at The Independent and UNB and into broadcast journalism in Radio Pakistan, Dacca and Bangladesh Betar, Dhaka for about six years. He was the only Asian who worked as an English news broadcaster under Qatar Broadcasting Service in 1992.
His notable publications include: Radharomon রাধারমন, Hason Raja nvQb ivRv, The Treasure-trove of Children Stories (translations), The Distant Shore, Inseparable and Juddoh (novellas).