The Monk Who Sold His Ferrari (Paperback) 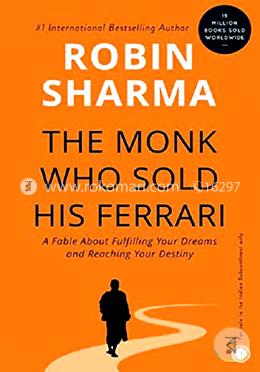 The Monk Who Sold His Ferrari (Paperback)

Julian Mantle is the leading character in this international bestselling story. His life was confined only to work, material extravagance and money. On a fateful day, he suddenly becomes a prey of cardiac arrest, which changes his life forever. An insight emerges out of him, soon after he gets well and he chooses to change the way of his life. He leaves everything and embarks upon a spiritual journey to the Himalayas in India, in a search for a more significant life. He returns with a profound change visible in him. He describes his experiences to his colleague-friend John and that is the story narrated to the readers. The Monk Who Sold his Ferrari is an International Bestseller with more than three million copies sold across the world, and it still continues to. This work has been translated into numerous foreign languages.

About Robin Sharma
Robin Sharma is an esteemed author and lawyer. He was born in Canada in 1965 and completed his graduation in law and graduated from Dalhousie University School of Law. He is the Founder, CEO and the Chief Visionary Officer of the global consultancy firm called the Sharma Leadership International Inc. The company’s clients include some of the most reputed companies such as GE, FedEx, Nike, Harvard Business School, and many more Fortune 500 companies. Robin Sharma was honoured with the Brand Laureate Brand Personality Award in the year 2009 and the Golden Gavel Award in the year 2011. He frequently visits different countries as a motivational speaker. His books have been translated to more than seventy languages and are being sold in about sixty countries. Some of the famous books penned by Robin Sharma are The Leader Who Had No Title, Who Will Cry When You Die: Life Lessons From The Monk Who Sold His Ferrari, The Saint, The Surfer, And The CEO: A Remarkable Story About Living Your Heart's Desires, Megaliving!, Family Wisdom From The Monk Who Sold His Ferrari, and Discover Your Destiny With The Monk Who Sold His Ferrari.