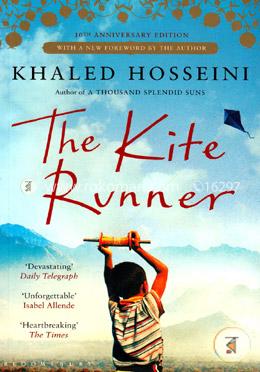 The book is a story of two young Afghan boys, Amir and Hassan. it is set during the time when the Taliban was rising and the Soviet Union was attacking Afghanistan. Amir, the son of a wealthy merchant, loves to fly kites and his servant’s son and trusted friend Hassan is his kite runner. One day, Hassan is brutally assaulted by a young boy Ali who swore to take revenge when Hassan protected him using his slingshot in an attempt to rescue Amir. Amir, however, did not go to help or call for help as he is too scared to intervene. He is guilty about this eventually Hassan is to leave Kabul for good with his father. Years later Amir and his father move to California where he marries Soraya. Fifteen years later he decides to back to Afghanistan. The book reveals the friendship and loyalty that is not lost between all the cruelty that is surrounding the characters.

১৯৬৫ সালে কাবুলে জন্মগ্রহণ করেন। বাবা ছিলেন একজন কূটনীতিবিদ, আর মা ফরাসি এবং ইতিহাসের শিক্ষক। ১৯৭৮ সালের সংঘাতের পর সপরিবারে তার বাবা আমেরিকায় চলে আসেন। রাজনৈতিক আশ্রয় গ্রহণ করেন সেখানে। হোসাইনি পেশায় একজন চিকিৎসক। বর্তমানে তিনি স্ত্রী-সন্তানসহ নর্দান ক্যালিফোর্নিয়ায় বাস করছেন। Khaled Hosseini (Born March 4, 1965) is an Afghan-born American novelist and physician. After graduating from college, he worked as a doctor in California, an occupation that he likened to an arranged marriage. He has published three novels, most notably his 2003 debut The Kite Runner, all of which are at least partially set in Afghanistan and feature an Afghan as the protagonist. Following the success of The Kite Runner he retired from medicine to write full-time. Hosseini was born in Kabul, Afghanistan. His father worked as a diplomat, and when Hosseini was 11 years old, the family moved to France; four years later, they applied for asylum in the United States, where he later became a citizen. Hosseini did not return to Afghanistan until 2001 at the age of 36, where he felt like a tourist in his own country. In interviews about the experience, he admitted to sometimes feeling survivor's guilt for having been able to leave the country before the Soviet invasion and subsequent wars.

And the Mountain Echoed